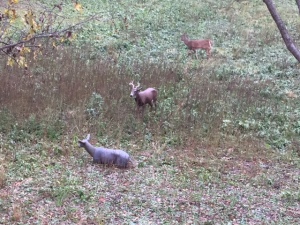 So far this year the deer hunting has been poor, for bucks anyway.  This is not surprising, typically Halloween is the first day that I consistently see daytime rut activity. Before that day almost all the lead up to the rut takes place at night, and almost none of the does are interested anyway.  But everything changes on Halloween. The 30th of October was a day before Halloween, but close enough for me to get excited.  On that morning I put out a buck and a doe decoy on the east end of a long CRP field. The wind was howling from the west, coming down the length of the field and delivering bursts of rain, then sleet, then snow. It didn’t take long for me to be cold.  After an hour or so the decoy blew over; considering the wind I was surprised that it lasted that long. Actually, I was surprised that I had lasted that long in a tree stand as well. So I unbuckled my safety belt and started to climb down to fix it. When I was about halfway down the tree, from out of the woods in back of me a doe charged past and headed out across the open field.  Close behind her were three bucks, all trying hard to keep up and grunting like a bunch of hogs as they passed by.  I never heard a thing until they almost ran me over. One stopped to stare at the decoys for a few moments then turned to catch up with the party, and by then the others were almost out of sight.

So I got the decoy set up again and got back up onto my stand with a new sense of optimism.  I was still cold but now optimistic as well.  After about a half hour more the doe raced crossways across the open field again, only this time instead of three bucks chasing her, now there were five.  Four of them were one, two, or three year olds, but the fifth was much bigger, clearly the kind of buck that I was looking for. They all chased around in circles for a while and then she stopped and laid down. Meanwhile I’m starting to wonder what this old gal might be willing to do for five bucks!  I know it’s an old joke, but hey, what better time to use it.  Besides I can’t help myself anyway.

Back to the story. After stalling for a little while buck number six showed up. This one is much bigger than any of the others and I don’t have to look him over twice to know that I would try for him if I had a chance.  He is a high, wide and very white racked 8 or 9 pointer, with the heavy neck and body of a fully mature buck.  So then the doe gets up and leads the chase again, around in a few circles but staying in sight in the field this time.  Then she stopped and stood to let the new big boy mount her.  All five of the others just stood there, less than twenty yards away with no attempt to challenge or interfere with what was going on. It was interesting also in that he stayed mounted for a long time, perhaps a minute or so, not the few seconds or so that is usual. Was he staying to intimidate or torture the overeager onlookers, or was he just enjoying the moment?  Clearly, I’m starting to overthink this stuff.  But to appreciate this you have to know how rare it is to see wild deer breeding.  Many hunters never see it, and with all my time in the woods I’ve only seen it a few times.  Anyway, after he dismounted she took off again, this time angling towards me with the whole bunch of bucks once again in hot pursuit.  As they raced by, still out of range, two of them peeled off to check out my decoys.  One was a yearling that kept his distance.  The other got close, about ten yards away and right between the decoy and me. Then he got nervous and circled downwind and presented an easy 15 yard shot.  I passed.  He is almost certainly a two or three year old with a fairly heavy, dark 8 point rack with short tines. I hope he makes it a few more years.

The rest of the morning was uneventful, but Chris Knutson was hunting a few hundred yards away and thinks the big buck and doe went sneaking by him a bit later. I think he’s right, they went his way when they left me and the buck he saw had a big white rack.