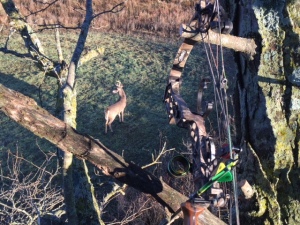 I just got back home from bow hunting in Kansas. I like to hunt in either Kansas or Iowa during the Minnesota firearms season, usually after the first weekend when I hunt near home with the kids. This year on the first weekend in Minnesota I hunted with Hannah and also with Dave Ramirez, Heather’s boyfriend. On the first morning, Dave, who had never hunted deer before, had a shot at a nice buck, but missed. That evening Dave got his first deer, and Hannah got one also. Dave got another the next day. All three were antlerless. That’s three in the freezer, plus the better part of one left over from last year, so we are in good shape in the venison department.  Still, I’ll take a couple more with the muzzleloader later this fall. With the kids increasingly embracing the healthy local source of meat that we have on the land, five or six deer are what we need.

So here is the summary of my Kansas deer hunt this year; in a word, it was frustrating. I stay and hunt on Bill Brannan’s property in NE Kansas. Bill is a good friend and a dedicated conservationist, and his land, though not big, has a long history of big bucks. Lots of them. Over the years I’ve seen them; I’ve seen their sheds, their trailcam photos, the big ones that Bill and his family and neighbors have taken, and the ones that are found dead occasionally. But not this year. This year I passed many small bucks, one- and two-year-olds, and a couple small threes. But I never did see any of the big mature bucks that Kansas is known for. Bill thinks that his older bucks are being poached–shot off the road but usually not recovered by outlaw “hunters” who fear being caught if they track a wounded deer. This area, because of its deer quality, has long suffered the poaching scourge, so Bill could very well be right. I tend to think it’s more likely EHD. They had a very serious outbreak in 2012 that greatly reduced deer numbers, and this summer was very dry again, but nobody really knows. I am posting a photo of the dead deer that were found on this property this year, mostly late last winter/early spring. Six nice bucks off 240 acres; it’s no wonder I’m not seeing any this fall.

Still, hunting here in Kansas is always a good time. The cabin where I stay overlooks a really nice small lake. Turkeys, bob white quail, waterfowl and lots of other kinds of wildlife are common, and even an occasional bobcat. Great flocks of snow geese call from the sky, some are high, others are quite low. Always fun to watch. But where are the older bucks…it’s frustrating. Almost like Minnesota!